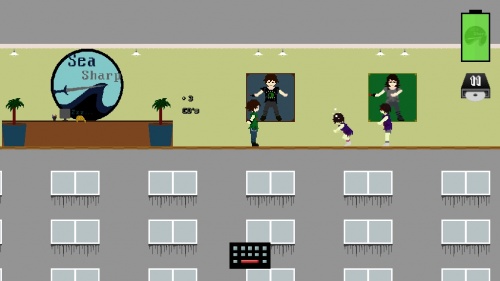 NTUI is a project developed for INNOV'Game 2013, a competition organised by a french engineer school, the EFREI, and won the 2nd price! You can freely download and distribute it here: http://40.innovgame.efrei.fr/en/?Download

N.T.U.I. is the acronym of Never Trust User's Input, a computer science term which defines a conductive path in development.

A team of 2 developers and an artist known under the name of Sea Sharp decided to make this idea a game by immersing you in the heart of a video game! In fact, you will embody a hero, revolted by having been put in a totally bugged video game ! Then, the hero decides to fight against his creators by using the source code to meet them and wreak his revenge! However, he has to take into consideration the twists and turns that the addicted players of this studio's games will mak him go through. Fortunately, or not, our hero will be able to exploit the numerous game bugs to get the advantage... but if he abused of them... it could be tragic... If you want to read more about the game's concept (and speak a little French!), we encourage you to read the Innov'Game project presentation file of N.T.U.I.!