by Elvashi
I've been working on this for the last few days. 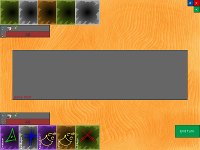 by Robin
Interesting. I couldn't play it, though, because I had no clue what to do and what all those cards meant. It kept saying I didn't have enough resources, for example, but I didn't know how to get those resources.

by Elvashi
Updated: theres three more cards (raid, manufacture, diversion), and I've pointed out in the tooltips that right-clicking discards cards (which is helpful if you are full with cards you can't use).
I've also made the initial splash-screen only show on start-up, rather than at the start of each round

@Robin: Certain cards grant resources, mostly the gold-colored ones. I'll probably change it so that you start with some resources, though. As it is you kind of depend on having/quickly gaining loot cards...

by fwoop
Nice game!
Some bugs:
1) Plagueflies tooltip says +2 plague, where the effect is actually +3.
2) Diversion tooltip says requires 3 supply, but you can play it with less, even 0 supply.

by Chief
I enjoy playing this game, even at this early stage! I would really like if you added a little flash effect, or some sparkle-thingies on the numbers (HP, Ammo, etc.) if they change. It would make it easier to notice which numbers that changed since last turn.

I like the idea a Zombie card game with death counter (plague). You have a nice foundation here.

by Punkroku
My ideas for the game:
There should be infected cards that increase plague just for drawing them from the deck.
The cards should have disease or blood on them...

by Robin
Punkroku, some of the threads you've been replying to are very, very old. Like this one. These games are unlikely to see a new update and in many cases the original authors are long gone. It might be a good idea to check the date of the thread before digging up another dead one.