Show off your games, demos and other (playable) creations.
Post Reply
21 posts

My 2nd ever real project that I actually finished (mostly) is now here for this exclusive audience! 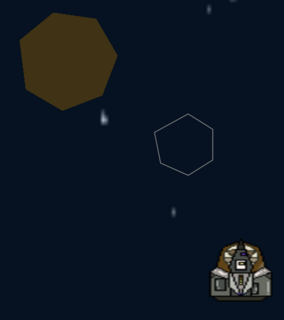 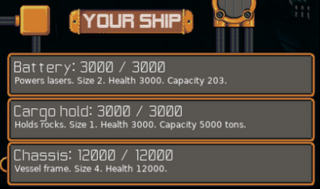 You are a lone hunter. You hunt asteroids. You pilot your ship around a dense asteroid belt looking for the sweet motherlode floating ore that will let you retire. Your biggest challenge is the environment and piloting your vessel in that zero-g environment. You will begin each journey from the starbase and drift towards the asteroid field. At the start, you can’t see any asteroids until you approach them. You’ll need to map each rock before you can mine it with the mouse button. The more you drift and explore, the more you’ll see and map.

Find the asteroids, mine them, fill your cargo, return to base for profit. Easy.

Link to manual (you really need to flick through it): https://docs.google.com/document/d/1X8J ... sp=sharing

Known issues: Happy to get all feedback. It's a hard game - I get that. Let me know if too hard. Will release to itch.io if there are no torches and pitch forks.

It seems you got something promising going on here, but there are some issues. (Don't get discouraged by this, though!)

When starting the game, the window kind of covers the whole screen, but isn't fullscreen nor maximized. It should either be smaller, or properly in fullscreen.

In the main menu, the fourth button has no text and seem to do nothing.

Pressing "Save game" also results in a crash.

In-game, I thought I could only go forward, until I finally (reluctantly) decided to read the manual. Rotational movement really needs some visual feedback. (Also, the rotation is painfully slow, unnecessarily so!) I'd highly recommend putting information, like controls, in-game instead of in a document outside the game. Immersion and usability and all that.

Text appearing close to the ship is too small to read without zooming in, and panning with the mouse when zoomed in/out is too fast/slow. (Divide the text scale/mouse movement with the zoom factor to fix this.)

The meters are confusing. Do you start with 0 oxygen? Yet I don't die specifically from running out of oxygen until the battery is drained. What is draining the battery when you don't do anything anyway? The lights? (The manual says the oxygen generator, but the oxygen looks to be 0, so it's just confusing.) It seems to just be a timer decreasing at a constant rate. (A pause button would be nice, btw.) The very little time you have in a run also doesn't work well with how incredibly slowly the ship rotates. I'd rather spend a bit more time to use less of the ships resources, than frantically use less resources!

During one run, I could suddenly rotate fast for a moment. I was going at a higher velocity so I might have collided with something invisible which could've sent me spinning. Maybe there's a bug that prevents asteroids from getting revealed in time? (Unless it's intended that you're supposed to sometimes collide with invisible things? That would seem very unfair.)

Entering and exiting the shop resets the ship's position, but not (or not always?) the rotation and rotational velocity.
Tools: Hot Particles, LuaPreprocess, InputField, (more) Games: Momento Temporis
"If each mistake being made is a new one, then progress is being made."
Top

Valid points and I did ask for feedback.

> When starting the game, the window kind of covers the whole screen, but isn't fullscreen nor maximized. It should either be smaller, or properly in fullscreen.

I noticed that but assumed it was my non-standard monitor size. If that happens to you as well then I'll take a closer look.

> In the main menu, the fourth button has no text and seem to do nothing.

Yeah - that will be the credits screen. I'll add that in with little fuss. Thanks.

Interesting. I'll look into that. Thanks! (F6/f7 work in game btw).

If I improve the rotation speed then that will be feedback enough - I hope.

> Also, the rotation is painfully slow

I thought someone would say this. It is a dilemma because the upgrade path is to actually buy faster rotation. Perhaps this is simply too slow for newbies.

I have always put controls in-game on all previous projects. On this occasion I promised myself a nice clean interface. Perhaps I can do a pop-up 'overlay' when you hold the 'H'elp key or something like that?

Roger that. I'll fix that to normal size.

Really? I didn't experience this. I'll try a few things including your suggestion. Thanks.

> The meters are confusing. Do you start with 0 oxygen?

I fear I have over-complicated the 'oxygen model'. The current model, which I'll change, is that an O2 gen is all you need to survive and provides 'passive' oxygen and wont' show on the gauge. It does use electricity (battery) so that's when the battery runs down. I'll make it a whole lot more simple. Thanks for typing that up.

> A pause button would be nice, btw

> The very little time you have in a run also doesn't work well with how incredibly slowly the ship rotates.

Upgrades! But yes - too slow atm.

> I was going at a higher velocity so I might have collided with something invisible which could've sent me spinning.

You most likely hit something you didn't see and the Box2D put you into a spin. Part of the game - to deal with that.

> Maybe there's a bug that prevents asteroids from getting revealed in time?

It is actually a ray cast from your ship straight out the front (narrow beam). Perhaps it needs to be wider beam or perhaps just a certain distance in all directions (including sides and rear)? The current ray cast encourages you to rotate your ship and "look" around you.

> Unless it's intended that you're supposed to sometimes collide with invisible things?

If you drift about in the dark, without looking, then yes - you invite trouble.

> Entering and exiting the shop resets the ship's position, but not (or not always?) the rotation and rotational velocity.

Great feedback. Thanks for trying it and typing all that up. Your opening sentence means this is worth tweaking and improving.

My challenge is to tune the meta so that it's easier for newbies, but still provide an upgrade pathway into middle and late game.
Current project:
https://togfox.itch.io/asteroid-hunter
Slow burn 2d zero-g space game with meta
Top

I've had similar issues as ReFreezed. F1 tries to open a Google Docs page, but Google Docs doesn't work for me so I couldn't read it. Maybe you could make an HTML and open it locally with file:/// rather than with http(s)://

Additionally, my screen is 1280x1024, so the default resolution was too big to see the gauges. I adjusted the resolution to make it fit in my screen and then many things were off and I didn't see the right side stuff (equipment I guess?). The texts and the click area in the main menu were correct, but the background graphic (the button itself) was displaced. If you're using a resolution handling library, either you're not using it right or it's not working well.

Even after I found out how to rotate, which took a while, I could do nothing with asteroids but crash on them.

After I died for lack of oxygen, I pressed Esc and New Game and the screen was black.

Not sure if the misspelling of "ded" instead of "dead" is intentional. I see it in the debug messages as well.
Thrust II Reloaded - GifLoad for Löve - GSpöt GUI - My NotABug.org repositories - portland (mobile orientation)
Top

Interesting concept but have a few problems:

1. it seems I can't move left and right using A and D and I also can't reverse using X. I can only move forward by pressing W.
2. Rotation with Q and E is way too slow, I would consider it broken, not very useful.
3. Don't know if its intentional but also when I scroll the map using the arrow keys it feels laggy, not smooth.
4. After I died and start a new game I get a black screen only with the background music playing. Nothing is drawn on the screen.
5. Clicking Load game and Save game crash the game with the error message fileoperations.lua:86 assertion failed!
6. Maybe intentional but the game start with no oxygen.

The text is tiny on my laptop screen.

Rotation is so slow that at first I thought I was pressing the wrong keys. Then I remembered having read about the slow turning on the forum. Slow rotation might be okay gameplay-wise but maybe with visible feedback. (thrust exhaust)

After slowly floating upwards and making a slight turn to the left, I pressed "F1 for help."
A webpage opened, there was more text than I expected necessary for a 2D spaceshooter.
After a short minute of scrolling I returned to the game and was greeted by the message with "You died from lack of oxygen."
Top

My workflow is to turn these into github issues and address one at a time.

I'm glad most of you think this is something unique.
Current project:
https://togfox.itch.io/asteroid-hunter
Slow burn 2d zero-g space game with meta
Top

v0.02 that contains the biggest bug fixes:
Known issues: To do: Future features: So, a few things to do still - none of them overly hard - but I wanted to get the game breaking things released.

Users browsing this forum: No registered users and 4 guests